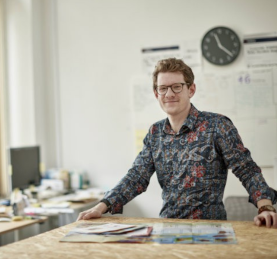 Adding Value with Help from a Mentor

Mentoring is an ongoing process, which could mean anything from a few meetings over a few months to ongoing support over years and even decades.

David founded Explain in 1993, having already run his own businesses and worked in a number of senior marketing roles. Today his company works for some of the biggest names in research and employs 65 people. Andy Stephenson founded Weekend Box, a company that provides activities for parents and their children each week on a loose subscription basis. His company now employs ten staff and has ambitious plans for expansion.

Andy first met David through a mentoring session organised by the Entrepreneurs’ Forum, in late 2015, having joined the Forum several months earlier.

On the importance of mentoring David said: “I didn’t have a mentor when I started out in business, as a concept mentoring hadn’t really been developed then. While I did get support and advice from a number of key individuals, in retrospect, my companies would almost certainly have grown faster if I had a mentor. Because of this I took the opportunity to get involved in mentoring through the Entrepreneurs’ Forum, and I’ve found a couple of businesses in particular that impressed me, which I have continued to support.”

Andy said: “The world is full of people who have experience that can add value to your business, who aren’t always in your particular sector. Something you notice in the North East more than in some other areas is how willing people are to help. We have a relatively small, close knit, business community filled with people looking out for each other.”

When asked about their mentoring relationship Andy said: “I catch up with David every few months, some people prefer a more frequent and more formal approach to mentoring, but informal works for me. I have formal relationships with my board and investors, this dynamic is completely different.”

David added: “For a mentoring relationship to work both parties have to like and respect each other, you need the right chemistry. It’s not just about the expertise of the mentor and the sector of the mentee, but in the case of Andy and myself my retail marketing experience and the nature of Weekend Box do fit together pretty well.

“The relationship is really informal; our meetings are usually done over a cup of coffee. Andy is a great ideas person, so it’s useful for him to have someone outside of the business to discuss his thoughts with.”

Andy described the benefits of the mentoring relationship, saying: “For me the main benefit is clarity, David helps me to see solutions to problems that don’t immediately occur if you haven’t already had certain experiences. David’s advice on building up our team by hiring the right people, and what to do if you hire people who don’t quite fit, has been invaluable.

“It is also incredibly useful to have someone neutral and independent, without any vested interests in the company, that you can take your ideas to and have them challenged.”

David said: “The ideas we’ve discussed include ways for Weekend Box to maximise its return on investment, and different revenue streams involving existing brands. It is important for companies like Andy’s to have a synergy with companies that share its target customers and advertising space.

“I have always been an advocate of strong brand values within a company, when asked what a company does and stands for every member of the team should give the same answer. When Andy and I discussed recruitment, I explained the need for these brand values, and that someone can have the qualifications and experience you’re looking for, but if they don’t buy into your brand they aren’t right for your company.”